Home » Features & market analysis » Which precious metals to buy in 2020?

Which precious metals to buy in 2020? 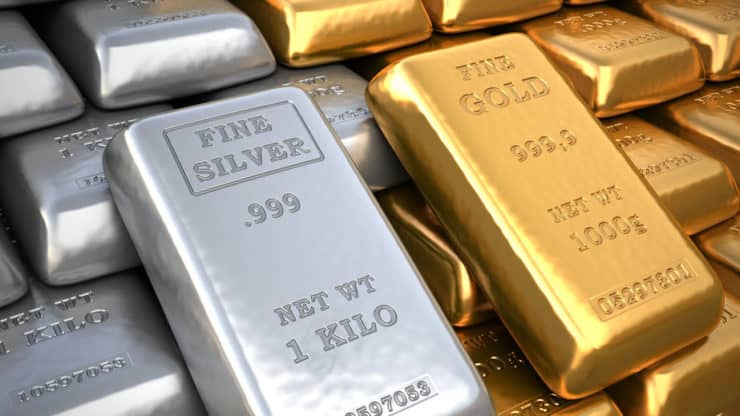 The COVID-19 outbreak has seen many investors running for the exits. In the space of just a few days, the Dow Jones stock index printed a series of huge one-day losses on March 09, 12, and 16, when the Dow plummeted 12.93% in a single day, topping the original October 1929 Black Monday drop of 12.8%.

Just eight days later, the index skyrocketed more than 11%, its biggest one-day gain since 1933. Swings like this, as traders work on huge selling and buying positions, have made VIX hit the highest levels since 2008 and the global financial crisis.

CBOE’s VIX is the benchmark indicator for the stock market volatility. It is also known as “Fear Gauge” or “Fear Index”, as it provides a measure of market risk and investors’ sentiments. A high VIX value is almost always closely associated with a huge selloff in the stock market. In layman terms, whenever VIX starts screaming higher, it means something’s wrong.

As investors are exiting their high-yielding asset investments, such as equities, they tend to shift their attention towards low-yielding, safe-haven assets, such as precious metals, the Japanese yen, or the Swiss franc.

“It’s a continued hunt for cash for liquidity. Everything is being sold, market participants are throwing in the towel just leaving the exits, and when everybody wants to exit there is a massive sell-off in particular in very illiquid markets like PGMs,” Commerzbank analyst Carsten Fritsch said.

We know that gold is arguably the most recognized safe-haven asset, due to its trait of being able to hold its value or increase in price in times of global turmoil. Given that 2020 brought us an unprecedented amount of uncertainty and turmoil, we assess the most recent performance of four precious metals – gold, silver, platinum, and palladium – and their outlook for the rest of the year.

Gold price has gained around 11% since the beginning of the year. The yellow metal has been on a tear in the past few weeks after, to the surprise of many, and fell around 20% in the first days of the COVID-19 outbreak.

“In these periods the US dollar declined, but there was also a limit to these declines. However, in the most recent crisis, the global financial crisis, gold prices declined by more than 20% before recovering, meanwhile the dollar rallied sharply as liquidity dried up,” precious-metal strategist at ABN AMRO Georgette Boele said.

The most logical explanation behind gold price declining in the time of global uncertainty lies in the fact that investors tend to exit all kinds of positions. Remember that the gold price gained more than 20% last year, meaning that there was a lot of profit to be taken off the table.

Once investors started regaining confidence in the markets, gold price gained more than 8% in a single week, recovering more than half of losses from the previous weeks. Finally, the gold price hit a new 7-year high last week, at $1,747. The next target for the buyers is $1,800 (the blue horizontal line).

Unlike gold, silver prices are having a difficult year as the metal recorded one of the worst periods in the last few years after dropping nearly 40% in value in just four weeks. Silver prices then started to push higher around the same time when the gold rally started, recovering around half of earlier losses.

“Renewed selling pressure may speak to a broader-based capitulation of recent optimism as markets absorb the Fed’s credit-boosting actions, refocusing on the dire state of the global business cycle,” said Ilya Spivak, Head Strategist at APAC.

As a result, ABN AMRO downgraded its price target for silver prices from $17.10 to $16.60, which is around 10% higher than the current market price of silver.

“Platinum has underperformed; it’s traditionally been higher than the gold price,” Thom Calandra of the Calandra Report said.

One of the key reasons for the slump in platinum prices is the plunge in demand for the metal, as diesel car manufacturers, which use the metal in emission-reducing catalytic converters, are practically shut down following the coronavirus outbreak.

The buyers were successful in pushing the price action above the key resistance near the $750 mark this week, with $850 being the next target to the upside.

Palladium prices hit an all-time high above the $2,800 mark in February, before crashing lower  to lose nearly 50% of the value in just a few weeks. Still, Palladium prices then screamed higher to post the biggest weekly gains on record in March.

Similar to other precious metals, investors were initially selling palladium due to a plunge in industrial demand.

“We expect lower jewellery demand from India and China, lower industrial demand and lower autocatalyst demand (from the major economies). We think that the supply shortage for palladium will ease further in the near term due to lower demand,” ABN AMRO’s Boele said.

Looking at the upside, Palladium buyers will be targeting the fresh all-time high above the $2,900 as their next target. Those looking to buy Palladium may have to wait for a potential pullback to $2,000, where a horizontal support is located.

Similar to other assets, precious metals have been on a roller coaster ride for the past few weeks. After a huge selloff that started in February and lasted until mid-March, investors regained their confidence and started pushing the prices of gold, silver, platinum, and palladium higher again.

Looking forward, gold looks better positioned than other precious metals to continue rallying as we may witness a bull run targeting record highs above the $1,900 mark.

Specialising in economics by academia, with a passion for financial trading, Michael Harris has been a regular contributor to Invezz. His passion has given him first hand experience of trading, while his writing means he understands the market forces and wider regulation.
Related news
EUR/USD ranging as ECB’S Knot warns of monetary policy dependance
4th July, 22:05
GBP/USD price extend gains to trade above $1.25 again
2nd July, 13:13
Ryanair stock price jumps 5% as the UK Government allows travel to 75 destinations
2nd July, 12:40
Macy’s stock price extends its bullish run, now up 18% on the week
1st July, 13:57
Bitcoin price moves lower as analyst questions PayPal reports
30th June, 19:06
Invezz uses cookies to provide you with a great user experience. By using Invezz, you accept our privacy policy.