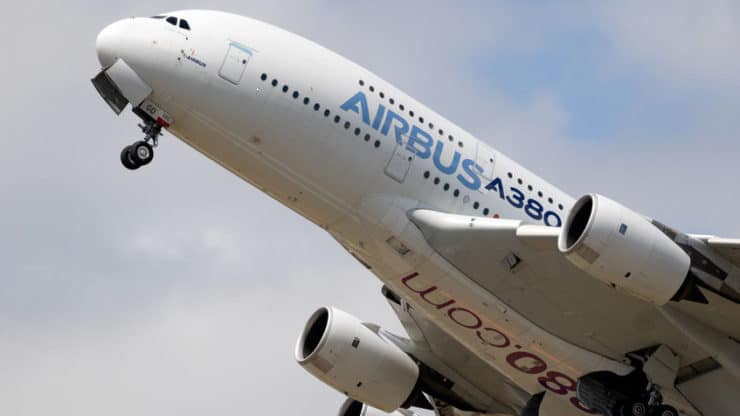 Airbus SE (EPA: AIR) said on Friday that it is extending the ongoing furlough for a total of 5,300 employees in the United Kingdom and Spain as the Coronavirus pandemic continues to weigh on the global airline industry. In an emailed statement, a spokesman for Airbus commented:

“This will be effective from 20th May till 30th September and affects all Airbus Operationss SL employees in Spain (with some exceptions), which means around 3,100 employees. Airbus Helicopters and Airbus DS employees in Spain are not impacted.”

France announced a £13.57 billion aid for its aerospace industry

In the UK, the spokesman added, the furlough will affect roughly 2,200 employees and is planned for 20th July to 9th August. The spokesman also said:

“In France, all employees of the commercial aircraft division are in some way affected.”

Airbus has reduced its working hours by 30% per week in France where about 29,500 of its employees are currently working.

The world’s largest aeroplane manufacturer had said in late May that it might be pushed into deeper layoffs in upcoming months as COVID-19 continues to hurt demand for air travel. The novel flu-like virus has so far infected a little under 9 million people worldwide and caused more than 468,000 deaths.

To help its aerospace industry cushion the economic blow from COVID-19, France announced a £13.57 billion aid in the first week of June as it acknowledged that hundreds of thousands of jobs were at stake due to the health crisis. Airbus also took a massive hit as several airlines deferred aircraft deliveries in recent months.

At the time of writing, the largest European aeroplane manufacturer has a market cap of £48.13 billion.

Aer Lingus says it will cut about 500 jobs

In separate news, Irish air carrier, Aer Lingus, that is a subsidiary of International Airlines Group, revealed plans of slashing its workforce by about 500 jobs due to the rising Coronavirus uncertainty. Aer Lingus said in a statement:

“Aer Lingus has informed the employment minister that headcount reductions of up to 500 employees across the business are anticipated.”

Mr. Khan specialises in Public Health by academia but is a trader by passion. Taking up two new hobbies of writing and trading in his teen years, he is now a professional trader and news writer with over 5 years of experience in various financial markets. Khan is passionate about bringing insightful articles to his readers and hopes to add value to their portfolios.
Related news
Bank of America publishes stronger than expected earnings report for the second quarter
16th July, 11:41
Experian posts a smaller than expected decline in revenue in the fiscal first quarter
16th July, 10:44
Hays reports a 34% decline in net fees as COVID-19 halts new hiring in the fourth quarter
16th July, 10:08
How The Best Businessmen Have Dealt With COVID-19
16th July, 08:54
BNY Mellon reports a 2% year over year increase in revenue in the fiscal second quarter
15th July, 18:49
Related market data
Invezz uses cookies to provide you with a great user experience. By using Invezz, you accept our privacy policy.