The Global Impact of COVID-19 on Bitcoin Trading 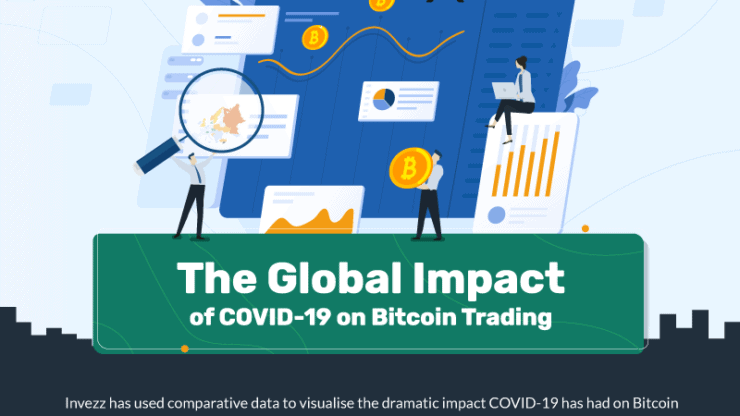 COVID-19 has taken the world by surprise, and people around the world have had to figure out a ‘new normal’ amid truly unprecedented events. One thing this current crisis has demonstrated is just how connected we are in our modern, globalised world. This interconnectivity has long been a key factor in the world of cryptocurrency trading, and the coronavirus pandemic has had a sizeable impact on crypto markets across the world.

Cryptocurrency is far from unique in this regard: the global economy has been thrown into uncertainty throughout early 2020, and responses by individual nations have had mixed results in mitigating the damage. From China to the USA, we’ve seen unprecedented actions by governments from around the world, all attempting to balance containing the virus with preserving their economies. Some countries were doing relatively well prior to the COVID-19 outbreak, while others were already struggling before the virus had even hit-making huge recessions a possibility and contributing to market uncertainty.

Advertently or inadvertently, however, some industries have benefited out of this crisis. Whereas areas of the economy reliant on the physical movement of people and money (such as tourism) have been hit hard, cryptocurrency trading has seemed well-positioned to perform well amid COVID-19. As a decentralised industry made up of millions of individual users across the world, the pandemic has in many ways been a stress test of crypto’s ability to maintain strength independently of what is happening to other markets.

So, what has actually happened to crypto under coronavirus? Well, it’s a mixed bag. Our recent study shows the direct effect that the virus has had on the cryptocurrency industry on a global and regional basis, and it does appear there has been a drop off in the amount of crypto being traded as a whole, but with interesting spikes in a few countries bucking the trend.

To give a bit of background on the timeframe of our study, the first few cases of the Coronavirus hit Europe in late January, with the World Health Organisation (WHO) declaring the disease as a global pandemic by the 11th of March. Invezz can report that over £337,300,758 of Bitcoin was globally traded on the LocalBitcoins platform since the start of March, 2020. During the same period in 2019, £537,318,670 was traded on the platform – meaning this year has seen a total drop of just over £200 million (a 37% reduction in trading activity).

This looks pretty bleak for the industry, but one thing thrown up by our data is that the picture gets a little more complex when one examines crypto trading on a country by country basis. Policies enacted by governments to combat COVID-19 have had a direct effect on Bitcoin, and the cryptocurrency industry as a whole, and everyone has done things a little differently. The purpose of this study was to dive deeper into the data, the situation and draw direct comparisons to the year before. Keep reading and we’ll take you through what we found.

In terms of the volume of crypto being traded, Russia continues to lead the way. The country saw the most purchases on LocalBitcoins in 2019, and it has retained its position at the top so far in 2020. Russian crypto spending did start from a high bar though, and while the country still tops the international comparisons the amount of crypto being traded has in fact dropped by 51% from last year – with £78,777,752.38 less being spent.

The UK has had a turbulent few years thanks to ongoing negotiations with the EU on Brexit, and this market uncertainty doesn’t look like ending soon. The country is still one of the bigger players in the crypto space, however, and interest in cryptocurrency appears to be growing. The UK had the 6th largest volume of cryptocurrency spending from Q1 to Q2 in 2019, and this year sits in 4th in terms of international comparisons.

This is interesting as, along with the economic problems of Brexit, the UK has been one of the hardest hit countries in the world when it comes to COVID-19. The city of London has long been a global financial hub, and while this appears to hold true with cryptocurrency as well, it’s worth noting that the UK’s rise up the crypto comparisons wasn’t driven by an increase in the amount being spent. In fact total crypto spending in the country has fallen by £5,024,520.79 to £24,815,433.

The USA has retained its 2019 position behind Russia in second place in terms of the total amount of bitcoin traded on the LocalBitcoins platform. Mirroring Europe, however, the country has seen a drop in overall spending. Similarly to Russia, the USA has experienced a drop in trading of nearly half, falling by £28,767,055 to £38,438,241.

Elsewhere in this region, Canada, Mexico and Dominican Republic (which all feature considerably lower down in the overall crypto rankings) were all also down on the previous year, demonstrating that crypto hasn’t been immune to the impacts of the coronavirus pandemic.

Unlike Europe and North America, South America has seen a boom in crypto trading during the crisis. Columbia, Argentina and Chile all saw increased volumes being spent on crypto this year. 3 South American countries in the study made it into the top 10 in 2020, demonstrating a movement towards cryptocurrency on the continent that bucks the international trend.

The most likely cause if this movement against the curve is the economic and political turmoil that preceded COVID-19 in many South American countries, and the subsequent mishandling of the virus. Brazilian president Jair Messias Bolsonaro has been widely criticised for his poor response to the crisis, and the continent has also seen spiraling inflation in countries such as Argentina and Venezuela. Demand for cryptocurrencies appears to be on the rise in certain regions of South America thanks to a falling trust in governments across the continent – exemplified by the fact that 20,000 shops in Venezuela are to start accepting cryptocurrency as a payment method.

Moreover, the economic lives of individual citizens across South America gives an indication of why crypto is an attractive option. According to IDG, many people don’t “have easy access to banking services but do have a mobile phone and access to WiFi, meaning that using a cryptocurrency could be considered simpler than trying to open a bank account.”

As the economic and political problems in South America see no signs of easing soon, we may yet see further increases in its cryptocurrency spending – and possibly further adoption of crypto by conventional retailers as people lose faith in centralised currencies.

Elsewhere in the global South East, Australia and Thailand are the next big traders, coming in at 12th and 13th respectively in the 2020 crypto trading table. Similarly to Europe and North America, these nations have seen big drops amid COVID-19. Crypto trading in Thailand this year is down by as much as 42.54%, whereas for Australia this figure is 21.78%. Japan and Vietnam were the only two countries in the region to be marginally up on 2019, as in general Asian cryptocurrency markets shrank with the global trend.

The Middle East has seen the sharpest decline in crypto activity in 2020. Iran dropped in the volume of bitcoin trading by as staggering 98.78% after being one of the first countries to be hit by COVID-19. The country was badly hit by the virus and is even now, still grappling with it, and it’s also worth noting that global politics also played a factor. American sanctions, a change in currency (Rial to Toman), and restriction of crypto exchanges under new ‘Currency Smuggling’ laws, have all hit bitcoin trading in Iran as the country reacts to the pandemic.

All these issues combined has seen Iran slip to 2nd from bottom in the global league table of crypto spending. With oil prices now also rock bottom, it’ll be interesting to see how the region bounces back and it looks like there are tough times ahead.

In sub-Saharan Africa, both Nigeria and South Africa have been strong traders of Bitcoin in the region, and both retain their 2019 positions in the top 10 in 2020. South Africa has only seen a drop of 1.68% of bitcoin trading during the pandemic, which is likely why they’ve maintained 9th position 2 years in a row. Nigeria, on the other hand, is a bigger player in the crypto markets and is still 6th in overall rankings despite having seen well over a third of its bitcoin trading slashed – underlining just how much bitcoin is traded in the country.

Here are the global standings for the total amount of Bitcoin* traded during the global pandemic compared to the year before:

For any further information regarding the study, please contact Heshaam Hague at [email protected]