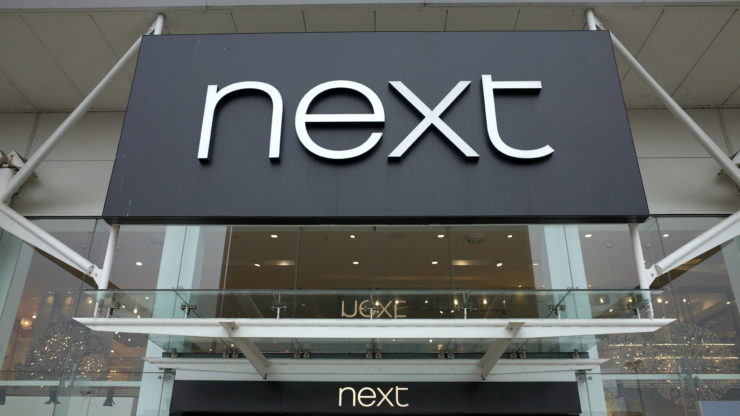 Written by:
Wajeeh Khan
29th July, 13:42
Are you looking for fast-news, hot-tips and market analysis? Sign-up for the Invezz newsletter, today.

Next Plc (LON: NXT) said on Wednesday that its full-price sales were under pressure due to COVID-19 in the second quarter. For the full year, the company forecast £195 million of pre-tax profit. In comparison, Next had expected an up to £150 million of annual profit. In separate news from the UK, Taylor Wimpey also said on Wednesday that it is likely to complete about 40% fewer homes in 2020.

Shares of Next opened about 8% up on Wednesday and jumped another 2% on market open. At £57 per share, the British multinational clothing company is more than 15% down year to date in the stock market after recovering from an even lower £34 per share in the first week of April. Learn more about stocks and the stock market.

Next reports a 9% increase in digital sales in Q2

In the quarter that concluded on 25th July, Next’s full-price sales came in 28% lower versus the same quarter last year excluding VAT. In terms of retail sales, the company saw a much broader 72% decline in Q2 on an annualised basis. Its digital sales, however, were reported 9% higher on a year over year basis due to COVID-19 restrictions.

In the first half, full-price sales tanked 33% versus the comparable period of last year. Retail sales plunged 62% on an annualised basis in H1 while digital sales also came in 11% lower for the first six months of the current fiscal year. The Anglo-Australian miner, Rio Tinto, also released H1 financial update on Wednesday.

For the full year, the fashion retailer expects its full-price sales to print roughly 26% lower. Hargreaves Lansdown analysts, on the other hand, anticipate a 35% to a 40% decline in Next’s full-year sales.

But RBC Capital Markets commented in April that Next’s EBITDA will remain positive in the current financial year even if sales tanked by 40%.

The British fashion company also acknowledged that 12% of its workforce is still on furlough and is likely to return by November. Apart from an already announced minor job cut that will primarily affect employees at its head office, Next is not planning on laying off any more of its workers.

Next performed largely upbeat in the stock market last year with an annual gain of about 65%. At the time of writing, the Leicester-based company is valued at £7.57 billion and has a price to earnings ratio of 12.15.