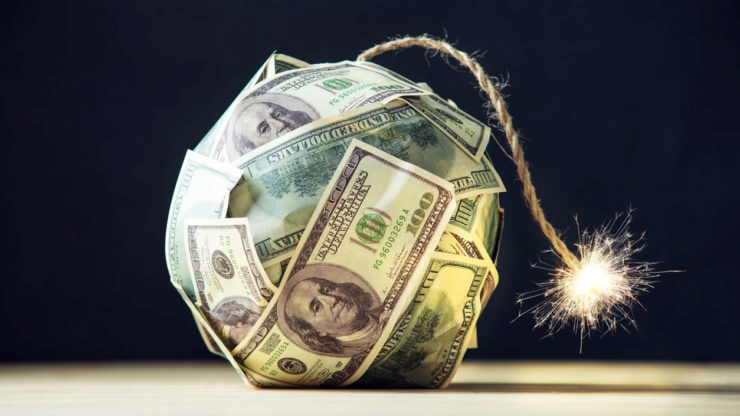 King dollar has been dethroned. The US dollar index (DXY) is down by more than 0.45% during the Asian session and is trading at the lowest level since 2018. It is down by almost 5% in the past month, making July its worst month in more than a decade.

The US dollar index is a tool that measures the performance of the dollar against a basket of currencies. The currencies in the index are the euro, sterling, Swedish krona, Canadian dollar, Japanese yen, and the Swiss franc.

The index continued to drop in overnight trading as investors reflected on the weak GDP data from the US. The data, released by the Bureau of Economic Analysis, showed that the economy contracted by 32.9% in the second quarter. That made the US one of the worst-performing economies in the world. For example, the Chinese economy expanded by 5.3% in the second quarter.

Worse, analysts believe that the US economy will lag its peers in the third quarter also. That is because the number of coronavirus cases in the country has continued to surge. Health officials confirmed more than 68,000 new cases yesterday, bringing the country’s total to more than 4.5 million. More than 150,000 American have died and states are rolling back their opening strategies.

The weakness of the US economy has started to reflect in recent data. According to the Labour Department, more than 1.43 million Americans filed for jobless claims in the previous week. That was higher than the previous 1.40 million. It was the second straight week of increases.

At the same time, divisions in congress have made it near impossible to pass a new stimulus package. This week, two stimulus packages authored by Republicans and Democrats failed to find support in the senate.

Analysts believe that US dollar index will continue to slide

As the US dollar index trades at a two-year low, analysts believe that the decline is far from over. In a widely-read report, Marc Chandler, an analyst at Bannockburn, said that he believed that yesterday’s greenback bounce was short-lived.

In another report, analysts at Goldman Sachs warned that there were “real concerns around the longevity of the U.S. dollar as a reserve currency.”

“The dollar may be looking at some stabilisation as risk assets stay capped for now, but with the other two safe havens (JPY and CHF) looking more attractive for a defensive stance as virus cases keep surging, USD recovery prospects still look tenuous.”

In an interview with CNBC, a Wells Fargo analyst said:

“The dollar could conceivably get a little bit of a bounce. But if you look for, let’s say, a trade for the next four to five months, we think it’s dollar weakness.”

Looking at the economic calendar, the US dollar index will react to the US personal income and spending data. It will also react to the Eurozone’s CPI and Norway’s unemployment data.

The weekly chart shows that the US dollar index has fallen in the past six consecutive weeks. It is trading at the lowest level since May 2018. Subsequently, the price is below the 50-day and 100-day exponential moving averages while the RSI has tumbled to the lowest level since February 2018. Therefore, the index will likely continue dropping as bears target moves below $92.