Home » News » Forex » USD/TRY: This is why the Turkish lira is plunging today

USD/TRY: This is why the Turkish lira is plunging today 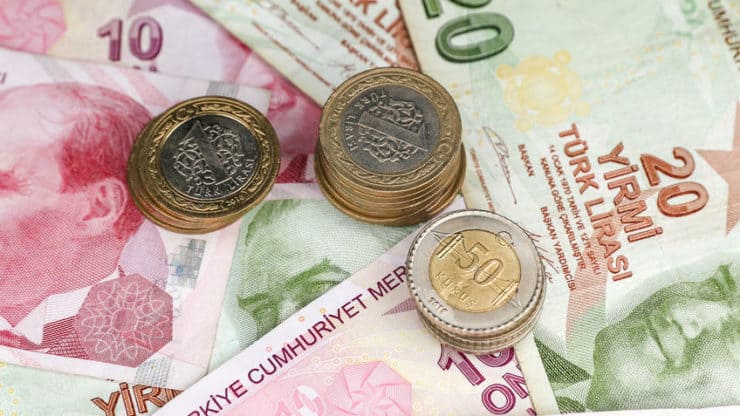 Why the Turkish lira is plunging

The Turkish lira ended its upward trend against the US dollar in June, when the USD/TRY pair dropped to a low of 6.6900. Since then, the pair has been in a slow uptrend but the gains accelerated yesterday, when it moved from 6.9077 to a high of 7.0830.

The Turkish lira sell-off happened after activity in the money markets was dysfunction. This happened after the lira weakened against the Turkish Central Bank target at 6.85 yesterday. Analysts pointed to a sudden rise in the costs of borrowing the currency in overnight market jumped to the highest level since March last year. The so-called offshore overnight swap rate jumped to 1,000+%, according to data from Bloomberg.

The ongoing challenges in Turkey mean that the central bank could be forced to intervene by raising interest rates. It has made nine rate cuts this year. A decision to hike would anger President Erdogan, who, like Trump, prefers ultralow interest rates.

This year, the central bank has spent billions to defend the currency against the US dollar. Indeed, analysts say that it has spent more money defending the currency this year than it did in 2019. By so doing, it has spent a significant chunk of its foreign reserves. In a statement to the Financial Times, an analyst at Citigroup predicted that the future looked “dire” for the lira.

Meanwhile, according to Bloomberg, the government is seeking to exempt global investment banks from restrictions on moving the currencies. The rule will be a reprieve for banks and traders who have been hindered to trade in the swap market.

The weekly chart shows that the USD/TRY has been in an upward trend in the past one year. The pair has gained by 31%, becoming the worst-performing currency in the emerging markets. The price is now attempting to cross its all-time high of 7.2665. Meanwhile, the pair is above the 50-day and 100-day exponential moving averages while the RSI has moved to the overbought level of 80. Therefore, I suspect that the pair will continue rising as bulls target the next resistance at 7.30.