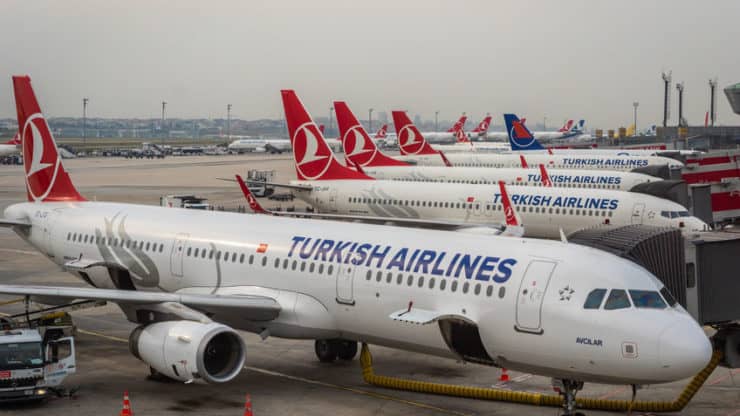 Turkish Airlines (IST: THYAO) expressed confidence on Monday that it will be able to avoid layoffs amidst the Coronavirus pandemic that curbed travel and tourism in recent months. The air carrier, however, will be resorting to aggressive pay cuts that will affect its ground staff and crew members, in a bid to cushion the economic blow from COVID-19. Turkish Airlines said it had already come to an agreement with the union to cut salaries.

Shares of the company closed just under 5% down on Monday. On a year to date basis, Turkish Airlines is currently about 30% down in the stock market. In comparison, it had recorded an annual decline of about 10% in 2019. At the time of writing, it is valued at £1.48 billion and has a price to earnings ratio of 5.92.

The pay cut is planned for sixteen months

An official of the Hava-Is union confirmed the agreement on Monday, under which, the national airline’s pilots will see a 50% cut on salaries. Its cabin crew will face a 35% reduction, while other personnel will also accept 30% lower wages.  Turkish Airlines struck a compensation deal with Boeing over 737 MAX grounding at the start of the year.

As per the union, the pay cut is planned for 16 months with periodic reviews on 180-day intervals. But Turkish Airlines will no longer be placing a part of its workforce on furlough. The air carrier will not be participating in the state-backed short labour pay scheme either.

The novel flu-like virus has so far infected 25 million people worldwide and caused over 0.85 million deaths. As the pandemic weighed on demand for global air travel, Turkish was pushed into restricting its flights (both international and domestic) in February.

Foreign visitors, as per the air carrier, almost disappeared when the COVID-19-related lockdown was at its peak in April. Numbers have only started to improve in recent months. Data from the tourism ministry recently accentuated a massive 86% year over year decline in arrivals last month.

In the fiscal second quarter, Turkish Airlines reported £630.50 million of revenue that came in roughly 70% lower as compared to the same quarter last year. At £230 million, its net loss in Q2 was significantly worse than £13.54 million of profit in the comparable quarter of 2019.