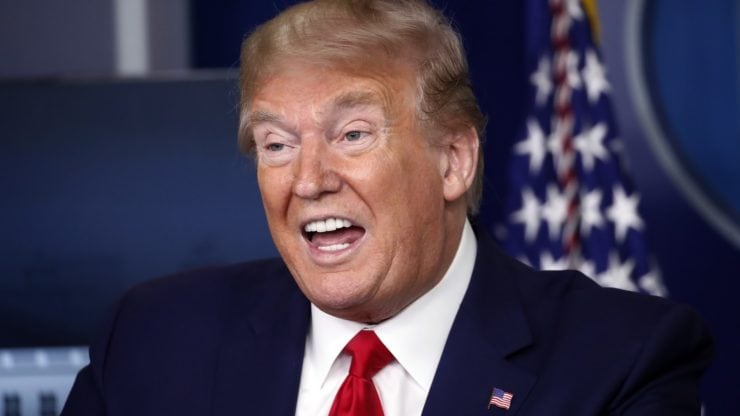 Volatile financial markets have welcomed European traders and investors this morning after the U.S. President Donald Trump and his wife Melania had tested positive for coronavirus and went into quarantine.

Donald Trump confirmed on Twitter that he and his wife Melania are positive on COVID-19 infection.

“We will begin our quarantine and recovery process immediately. We will get through this TOGETHER!,” Trump said.

Trump is 74 years old and is at great risk for Covid-19 because of his age and being overweight. Trump had no serious health issues during his time as a president, however, he hasn’t followed a healthy diet or exercised regularly either.

Over 200,000 Americans have died from the virus, mostly those at an older age and with pre-existing health conditions. Trump is known for rarely wearing a mask and for mocking others for doing so, particularly Democratic presidential nominee Joe Biden.

In the first presidential debate three days ago, Trump pulled out a mask from his pocket, saying: “I wear masks when needed. When needed, I wear masks,” and then derided Biden for wearing face coverings on a regular basis.

“I don’t wear masks like him. Every time you see him, he’s got a mask. He could be speaking 200 feet away from them and he shows up with the biggest mask I’ve ever seen,” Trump said.

Health experts have said numerous times that wearing face coverings are essential to stop the spread of the deadly virus. Joe Biden has slammed Trump for his bad response to the virus.

Over recent weeks, the president has held several rallies including thousands of people in the run-up to the upcoming election, ignoring warnings from health professionals who have strongly advised against holding events with large crowds.

Last night, Trump anticipated that the end of the pandemic is near, shortly before the news that his top adviser, Hope Hicks, had tested positive for Covid-19.

Hicks travelled with Trump on September 29 and 30. The news about Trump testing positive is expected to drastically affect the presidential race. Trump’s new activities schedule has been released today and it doesn’t include his planned trip to Florida.

On the other hand, Biden is expected to campaign in Michigan today and these are the two swing states that could decide the outcome of the race.

“Trump has been trailing behind Biden and he has clearly failed to narrow the gap after the first debate … I suspect markets will lean towards the view that Biden will likely win the election,” said Naoya Oshikubo, senior economist at Sumitomo Mitsui Trust Asset Management.

The president has campaigned regularly across the U.S. in a bid to win the race against Biden, who has been avoiding rallies with large crowds. On the other hand, Trump has praised his campaign rallies with a large number of people, who do not face coverings either or maintain social distance.

“It will weigh on the market today and early next week but will not induce a long-lasting correction if the infection is contained to Trump,” said Francois Savary, chief investment officer at Swiss wealth manager Prime Partners.

The U.S. benchmark index S&P 500 futures are trading 1.06% in the red three hours before New York opens for trading.

Crude oil prices extended yesterday’s losses to over 4% on Friday on Trump news. Moreover, the fact that there’s still no agreement on the new stimulus bill increased investors’ worries about demand.

“It was a weak market already and this event has come along and added uncertainty, giving pause for people to say, ‘you know what, I’m taking some risk off the table,” said Lachlan Shaw, head of commodity research at National Australia Bank in Melbourne.

Opposite to crude oil prices, gold spot prices gained this morning to erase overnight losses and trade 0.1% in the green. The yellow metal is now trading above $1,900/oz again.

“It will now be a wait-and-see game where gold will attract some bids. It’s certainly not a market where I see any appetite for selling gold,” said Saxo Bank analyst Ole Hansen.

The intraday resistance line is located at $1,922/oz.

USD/JPY, a key benchmark index for the overall risk sentiment in Forex, plunged to below $105 on this morning’s news. The EUR also lost against the greenback, but to a lesser degree. As expected, commodity currencies (AUD, NZD, and CAD) all lost against the dollar.

“The president of the United States has got a disease which kills people. People are de-risking because of that,” said Chris Weston, head of research at Melbourne brokerage Pepperstone.

The cryptocurrency market fell over 3% today to hit a valuation of $320 billion. A move lower stopped at the 200-DMA near $320 billion as buyers attempt to defend this important level.

Financial markets, with the exception of gold, yen, and dollar, fell on Friday morning after the U.S. President Donald Trump and his wife Melania tested positive for Covid-19 infection.