Costco stock maintains a symmetrical triangle pattern. What this means for the price

Costco Wholesale Corporation (NASDAQ:COST) continues to send mixed signals. The stock has been trading in a symmetrical triangle since bottoming at $406 in May. Is a breakout on the horizon after mixed retail news?

Costco attributed the missed earnings to global economic woes that have hit sales. Persistently high inflation has also been a thorn in the margins of Costco. However, there were positives.

Costco said its marketing share for gasoline sales continues to rise. According to the chief financial officer, Richard Galanti, gasoline has been more profitable than ever in recent months. The company’s membership fees also rose by 5.7% to $1 billion. The renewal rates were 92.5%. Going forward, Costco aims to boost its e-commerce faster than in-store sales. The company has earmarked 24 new stores for the current financial year.

Although COST fell after the mixed earnings, it has slightly recovered from the ascending trendline of the symmetrical triangle. That comes as investors digest the post-earnings presentation. A breakout could now occur for COST either way. But considering that COST is emerging from a bottom price, bulls may have an edge.

COST recovers from the ascending trendline 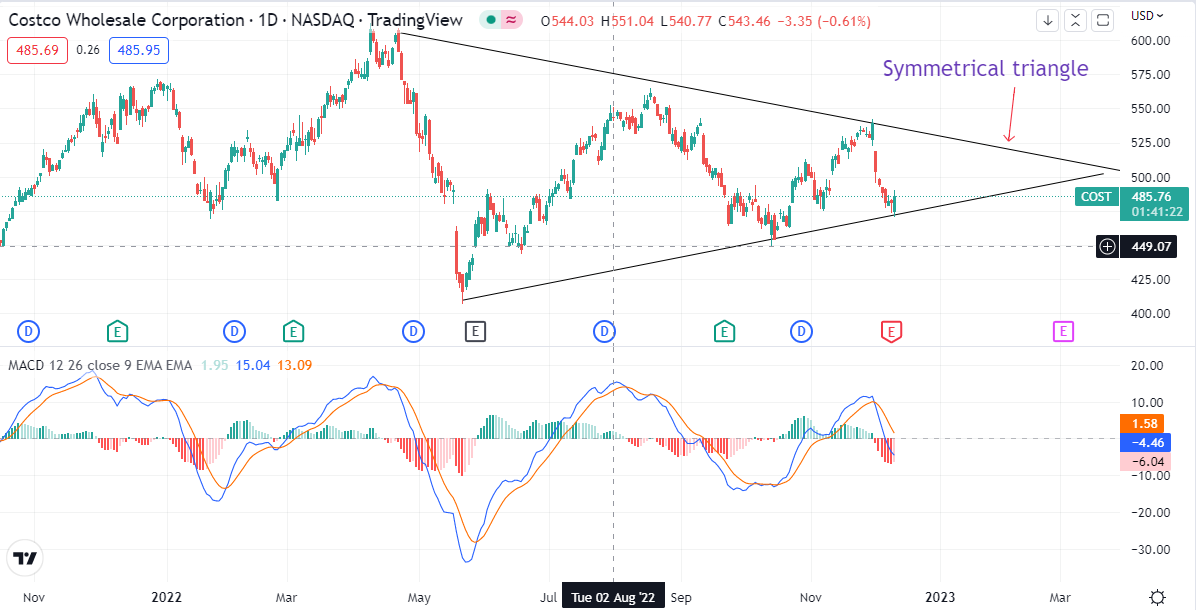 Technically, Costco stock trades in a symmetrical triangle. The chart pattern indicates a price consolidation ahead of a potential breakout. From the MACD indicator, the stock has moved from the bear and bull zones, and vice versa, for each price cycle. The cycles continue to narrow, which paves the way for an inevitable breakout.

What to do next?

The price action of Costco stock is optimistic. We recommend investing in COST after a bullish breakout from the symmetrical triangle.