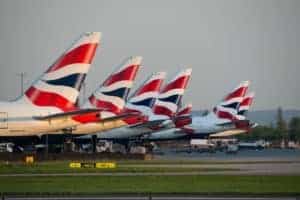 International Consolidated Airlines Group’s (LON:IAG) share price has fallen into the red in London this Monday morning, as pilots at its British Airways unit kicked off an unprecedented 48-hour strike. The news comes after it emerged last week that the company, which also owns Iberia, Aer Lingus as well as low-cost carriers Vueling and Level, was planning to crack down on perks for striking pilots.

Reuters reported this morning that British Airways pilots had started a 48-hour strike today, grounding nearly all the airline’s flights in unprecedented industrial action over a pay dispute. The move came after the British Airline Pilots Association (BALPA) gave the airline notice of the strike last month, which marks the first-ever strike by BA pilots.

“We understand the frustration and disruption BALPA’s strike action has caused our customers. After many months of trying to resolve the pay dispute, we are extremely sorry that it has come to this,” the airline said in a statement, as quoted by the newswire, adding that with no detail by the association on which pilots would strike, it had “no way of predicting how many would come to work or which aircraft they are qualified to fly” so it had to cancel all flights.

Reuters noted that both sides had said that they are willing to hold further talks.

“We hope we can find a way of resolving this dispute. We’ve been trying very hard to do so for the best part of nine months now but here we are now sadly having to take industrial action,” BALPA General Secretary Brian Strutton told BBC radio.

Following strikes today and tomorrow, another day of industrial action has been scheduled for September 27.