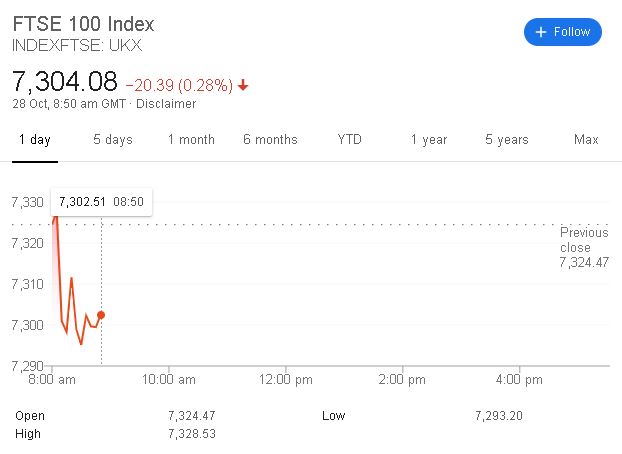 Owing to the poor performance of Sterling in the currency market derived from the Brexit complications that kept the sentiment under pressure, the FTSE 100 index printed its best performance last week in almost nine months. The market opened on Monday at around 7,150 level and closed the week at 7,320.56 on Friday. As per the recent report, Footsie opened at 7,324.47 this morning and seems downbeat so far. Having made a low of 7,295.15, it is currently trading at 7,302.15.

It has been further added that the index may present unusual volatility today, October 28th, 2019, owing to the UK’s Parliament voting on PM Johnson’s call for an early general election later today.

On the business front, HSBC Holdings has announced the Q3 earnings report earlier this morning. As per the report, the investment bank and financial services company has missed the targets for revenue and profits. The softer outlook represents an 18% drop in pre-tax profits for the third quarter that is significantly lower than the estimate.

More On The Business Front

According to the Sunday Times, Prime Minister Boris Johnson has highlighted that there are plans for the upcoming 5G telecommunication networks of the United Kingdom to be made accessible for Huawei Technologies Co Ltd.

A joint venture between Vale SA and BHP Group, Samarco, has been granted permission to recommence activities at Germano iron ore mine in Minas Gerais (Brazilian state), as per the statement by the environmental regulator for the state on Friday. The operations were on halt since the dam collapsed four years ago and took multiple lives.

Other than that, Photo-Me International will also be revealing its trading statement later today. Alphabet Inc. is set to reports its Q3 earnings on Monday as well, however, with the report coming in after the day close, its impact will primarily be observed in the financial market from tomorrow morning.

Following Mr. Kostyantin Zhevago stepping down as the Chief Executive at Ferrexpo, Mr. Chris Mawe, formerly the chief financial officer for commodity trading and mining company, has taken up the role. Mr. Zhevago is under money laundering allegations linked to his private business that he held till 2015.

Petra Diamond Ltd, Bilby, and Verseon Corp will be holding an annual general meeting (AGM) on October 28th, 2019. The contents of the meeting are also being anticipated to stir up the market movement. The figure for CBI realized sales for the UK set to be revealed at 11:00 GMT may also contribute to the market movement on Monday.