A forty-year high US inflation rate, skyrocketing energy prices, and indications that the US economic recovery may be damaged by the effect from sanctions against Russia over its invasion of Ukraine allpoint to much-feared stagflation – a precursor to recession.

To address these issues, the Federal Reserve raised interest rates a quarter point on March 16, 2022. This is the first rate increase since December 2018, with six more expected in 2022 as part of a  hike cycle expected to last through 2023.

Why do interest rates matter?

Interest rates have a direct impact on the cost of borrowing and spending decisions made by businesses and households.

The federal funds rate is the interest rate that banks, savings and loans, and credit unions charge each other for overnight loans. Higher interest rates shrink the available money for purchases. This raises the cost of getting money, which negatively affects earnings and stock prices, except financials like banks.

It may be easy to finance a new project when interest rates are low, but if the expected interest payments double, the same project wouldn’t be financially successful. This determines which products and services are available and how investments are structured, which has an impact on the global economy.

When thinking of it from the consumer’s perspective, consider how much more money you would keep in your savings account if it earned 10% instead of 0.06%. Or, you might open a credit card at 3%, but you wouldn’t borrow at 30% unless you had no other choice.

What does it have to do with Bitcoin?

There are varying opinions about which asset class Bitcoin belongs to. Some believe Bitcoin is the ultimate store of value and protection against inflation, comparable to gold. There is a definite reason for the rise in interest in Bitcoin in light of uncertainty surrounding the traditional financial system.

Yet, not just crypto fans are excited about Bitcoin’s potential as a safe-haven investment. Zach Pandl, Goldman Sachs’ co-head of foreign exchange strategy, said cryptocurrencies could continue to dethrone gold.

“Bitcoin may have applications beyond simply a ‘store of value’ – and digital asset markets are much bigger than Bitcoin – but we think that comparing its market capitalization to gold can help put parameters on plausible outcomes for Bitcoin returns,” Pandl explained.

The majority of crypto experts assert, however, that Bitcoin is following the same pattern as the stock market.

As evidence of this trend, the 90-day correlation between BTCUSD and the S&P 500 benchmark reached 0.50 on March 23, the highest level since October 2020.

In this scenario, the rise in the Fed’s rate would negatively affect the price of BTC just as it has historically affected stocks.

Another study by Deutsche Bank analyzed the performance of the S&P 500 over 13 hiking cycles since 1955, finding that the index returned 7.7% after 365 days following the first hike, with the weakness beginning after 9-10 months and lasting a year or so.

Therefore, the negative effects of increasing interest rates on stocks and therefore Bitcoin may not be felt for some time. It is possible both markets will trend upward through at least December 2022 after the first rate hike on March 16.

However, investors are concerned this year will be out of the ordinary in light of the Russia-Ukraine war with unprecedented inflation and a potential recession.

Would Bitcoin survive a recession?

The markets are skeptical that the Fed can engineer soft lending by letting inflationary pressures cool without triggering a recession.

Yet this seems highly unlikely especially as the US Treasury yield curve nears inversion  – a reliable recession warning indication for decades.

The US Treasury yield curve – the difference between 10 year treasury yield and its 2-year equivalent – typically invert to signal recession, while positive yield curve indicates stronger economic growth and an improving stock market. Currently, it is at its lowest level since July 2020.

“And we now see the risk that the US enters a recession during the next year as broadly in line with the 20% to 35% odds currently implied by models based on the slope of the yield curve,” Goldman Sachs chief economist Jan Hatzius wrote to investors. 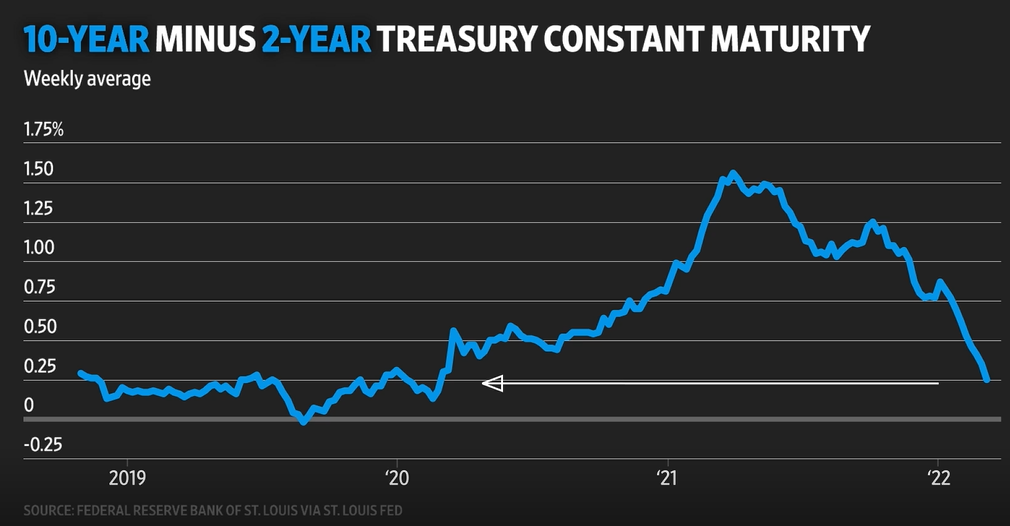 Historically, recessions and losses in the S&P 500 have gone hand-in-hand. The index dropped by 35.0% during the Great Recession.

Is Bitcoin doomed to the same fate? Possibly not. Even though there is a strong correlation, we can’t say Bitcoin is the same as the S&P 500. Here’s why:

Over the long-term, Bitcoin outperforms major assets, as seen in the table below:

Bitcoin was created for it.

With the launch of Bitcoin in the midst of the Great Recession, the idea was to provide people with a currency they can use when conventional financial institutions fail.

Bitcoin is driven by other factors as well.

Aside from macro trends, the price of Bitcoin can fluctuate because of regulations, changes in institutional adoption, or a host of other factors.

Considering how closely Bitcoin correlates with risky assets, it is likely that its price is also affected by macroeconomic trends and decisions made by the US Federal Reserve. We can look at the correlated asset’s behavior to get an idea of what to expect. However, it would be incorrect to assume that Bitcoin works exactly the same way as a particular traditional asset class. It still retains its own class with its own history, goals, and association with a much broader technological revolution.