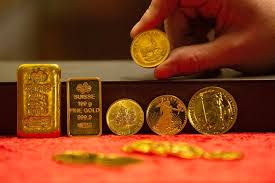 On Friday, the safe-haven gold prices fell in Asia as traders continued to monitor progress on trade wars.

Now, gold traders are looking at the U.S. Fed Reserve meeting scheduled for next week.

“Gold hasn’t really found a direction, it is indecisive. Right now it is consolidating and waiting for an opportunity which could change on Dec. 15,” said Margaret Yang Yan, a market analyst at CMC Markets.

“If the trade talks break down, then the price could spike up. Otherwise, we see gold to continue consolidating towards the year-end,” Yang Yan said.

“It’s completely different from earlier in the year when gold was absolutely the star.”

On Thursday, the U.S. President said trade talks were going on well, a remark that pushed the global equities higher.

Trade deal uncertainties have pushed investors to the sidelines in recent sessions.

Overnight, he said negotiations with China were going on very well, just a day after he dented hopes for the trade deal.

He said he had no deadline in mind and that the deal could wait until after the Nov 2020 U.S. presidential election.

Meanwhile, Steven Mnuchin, the U.S. Treasury Secretary, told reporters that negotiations between the U.S. and China were progressing well without a deadline for the conclusion.

The latest U.S. job report due later in the day is expected to generate some attention.